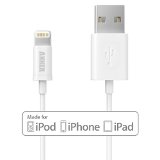 The highest average review rating of any charging brand.
One in three chargers sold on Amazon is from us.
Join the 6 million+ satisfied customers powered by Anker.

Apple MFi Certification
Each cable contains a unique, verified serial number and an authorization chip issued by Apple to ensure 100% compatibility with any Lightning device.

A Cable You Can Count On
We bent the end of this cable over 4000 times and saw no damage or change in performance. Heat-resistant connectors ensure complete safety and reliability.

Extra Cable
Replace your original 3ft cable or add another for your home, workplace or suitcase.

Case Compatibility
The super slim Lightning connector head slots into virtually all case openings. Don’t be denied your case of choice by a bulky cable.

World Famous Warranty
At Anker, we believe in our products. That’s why we back them all with an 18-month warranty and provide friendly, easy-to-reach support.

Please Note:
This cable’s Lightning connector does not fit Lifeproof iPhone 6 cases. It will fit Lifeproof cases for other devices as well as the vast majority of cases from other manufacturers.