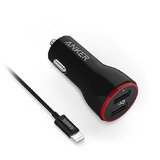 Apple MFi Certification
Each cable contains a unique, verified serial number and an authorization chip issued by Apple to ensure 100% compatibility with any Lightning device.

Incredibly Compact
The PowerDrive 2 is one of the slimmest, sleekest car chargers on the market.

Case Compatibility
The super slim Lightning connector head slots into virtually all case openings. Don’t be denied your case of choice by a bulky cable.

World Famous Warranty
At Anker, we believe in our products. That’s why we back them all with an 18-month warranty and provide friendly, easy-to-reach support.

PowerDrive 2 Compatible With:
Apple and Android smartphones, tablets (including the Nexus 7) and other USB-charged devices except for the iPod nano, iPod Classic, HP TouchPad and Asus tablets.

Note:This cable’s lightning connector does not fit Lifeproof or Otterbox iPhone 6 / 6 Plus cases.