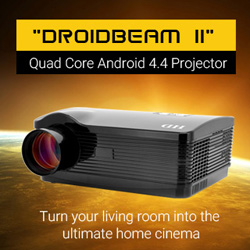 “Projectors have been around for decades, but never became common place in the living room,” says Rose Li, public relationship manager at Chinavasion. The online wholesale company announced that this is going to change with the arrival of next generation Android projectors that offer greater affordability and usages.

“Whether we talk about large LED projectors or small mini projectors, the fact is that they all cost well over 600 US dollars. Even though, many consumers will be interested in owning a projector at home, the price is definitely the deal breaker for most,” says Ms. Li.

Besides the price tag, projectors have traditionally been devices used by early innovators, who needed to have knowledge of how to install and use them. Ms. Li says, “As Android is the most used operating system for mobile phones the majority of consumers are already familiar with it. This means that the Android operating system will be very intuitive for them to use and Android based projectors will have a wider appeal. The only difference is that Android can now be experienced in 250 Inch instead of a mere 5 to 10 Inch phone or tablet screen.”

With this insight, Chinavasion has now launched the “Droidbeam II” Android projector in direct cooperation with Chinese factories, and it comes with a 320 US Dollar price tag. “The projector runs the Android 4.4 system and has a powerful quad core processor,” says Ms. Li. The “Droidbeam II” is Chinavasion’s first attempt to not only offer a projector to the world that’s affordable and easy to use, but also allows users to stream movies directly from the web or access a full range of apps that are readily available from the app store.

With a 1.5Ghz quad core CPU and 1GB of RAM, Ms. Li says, “The Droidbeam II will allow users to run apps smoothly even when several are open at the same time. With 3000 lumen a 2000:1 contrast ratio and 1280×768 Native resolution users can watch movies, run apps, play games or even uses this as a large screen home computer and enjoy stunning life size images in fantastic color depth and detail.”

“Traditional projectors were not only expensive to buy but also be costly to maintain with projection bulbs running into hundreds of dollars and only lasting a few thousand hours.” said Ms. Li. “Users won’t have any of those woes with the Droidbeam II or other LED projectors as the lamp lifespan of most LEDs used in these devices is around 50,000 hours, which represents a significant cost difference” Ms. Li explained.

Chinavasion is a supplier of wholesaler LED projectors and other wholesale electronics. Visit Chinavasion.com today to start importing electronics and gadgets from China.