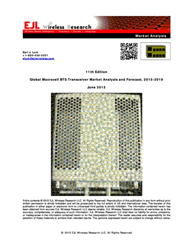 The global macrocell base transmitting station (BTS) transceiver (TRx) market grew by 35% in units in 2014 and marked a second year of record shipments, according to the latest report from EJL Wireless Research titled “Global Macrocell BTS Transceiver Market Analysis and Forecast, 11th Edition, 2015-2019.” “While growth in 2014 was strong, it did not match the levels of 2013. As expected, Huawei remained the world’s leading supplier but on a pro forma basis, the combination of Nokia Networks and Alcatel-Lucent would have put the company in the number two position, just edging out ZTE,” says founder and President, Earl Lum.

The report provides a unique perspective on the global shipments and demand for base station radio transceiver equipment covering all air interface standards and frequencies and major OEMs including Alcatel-Lucent, Ericsson, Huawei Technologies, Nokia Solutions Networks, Samsung Electronics, and ZTE.

Some key and notable facts from the analysis include:

“Demand in the second half of 2014 was impacted in Q4 by the current grafting probe in China. Please see our separate research analysis titled “China Wireless Infrastructure Industry 2015 Outlook: Near-Mid Term Impact of Graft Probe and Mobile Operator Consolidation” for more detailed information. We have drastically slashed our forecast for 2015 due to this issue and believe it will take the remainder of 2015 to resolve. We are therefore forecasting a strong recovery in the market for 2016 and 2017 due to the backlog created in 2015. While the FCC’s auction for the AWS-3 spectrum was great in raising money for the US Treasury, it essentially broke the bank in the US market and has caused a significant restructuring across the mobile industry. Current and future spectrum auctions globally will continue to drive demand for LTE products. We have also added new analysis on Tx and Rx paths as the industry moves from 1T2R and 2T2R transceiver configurations to higher order 2T4R and 4T4R architectures for FDD LTE, The eventual adoption of MU-MIMO will continue to drive higher order MIMO configurations for FDD LTE,” says Lum.

Some key predictions from EJL Wireless Research LLC for 2015:

Global BTS CDMA TRx shipments are expected to decline by 10%

The top suppliers for overall macro base station transceiver shipments as well as by air interface standards for 2014 were:

The report is currently available for purchase and information can be downloaded at http://www.ejlwireless.com.

EJL Wireless Research LLC provides proprietary, accurate and cutting-edge market analysis and consulting services on the wireless technology ecosystem and defense and aerospace industries. The firm’s wireless infrastructure research division focuses on all vertical elements of the wireless ecosystem including mobile subscribers, mobile operators, mobile handsets, mobile infrastructure and mobile content. In addition, the firm provides analysis across horizontal technology suppliers including RF semiconductor materials, RF semiconductor/components, subsystems and OEMs. Similarly, the defense and aerospace division focuses its efforts on the ecosystem supporting UAV and airborne platforms and subsystems. Our goal is to provide our clients with mission critical market analysis and information.

EJL Wireless Research LLC believes it has a corporate responsibility, both local and international, in giving back to the community. Please visit our website for more information about the charitable organizations it supports at: http://www.ejlwireless.com/corporate_responsibility.html.

EJL Wireless Research LLC is managed by Earl Lum. Mr. Lum has over 20 years of experience within the wireless industry including 8 years as an Equity Research Analyst on Wall Street covering the global wireless industry. The company is headquartered in Salem, NH. For more information about EJL Wireless Research, please visit the company’s websites at http://www.ejlwireless.com, http://www.ejldefense.com or our weblog at http://ejlwireless.wordpress.com.