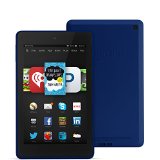 The Fire HD 6 goes anywhere with its pocketable design–features a beautiful 6” HD display, 2x faster quad-core processor, and unsurpassed reliability in its class. Fast quad-core processor up to 1.5 GHz—2x the speed and over 3x the graphics performance of previous generation Fire HD for quicker apps, smooth videos, and better overall experience.

Fire HD 6 features a 1280×800 high definition LCD display with over a million pixels (252 ppi) and a brighter display for more vibrant colors and whiter whites.

Fire HD 6 is the ultimate pocket-sized tablet with a smaller profile, thinner bezel, and lighter weight design than the previous generation Fire HD.

With a durable Gorilla Glass display and rigorous reliability testing, you won’t find a more reliable tablet in its class. Fire HD includes a front-facing camera that is perfect for Skype video calls and taking selfies to share via Facebook or e-mail.

Which color will you choose? Amazon Silk is our cloud-optimized web browser, exclusively available on Fire Tablets and Phones. The latest version now includes print support and Private Browsing mode (coming soon). Private Browsing allows you to browse the web without Silk saving a record of what you visit. Other features include Reading View, which provides a clean, easy-to-read version of websites by removing unnecessary images and clutter.

Rent or purchase the biggest new releases and most popular movies and TV shows. Stream instantly over Wi-Fi or download to enjoy later. Fire tablets are built for the best in gaming, with tilt, turn, and multi-touch controls.

With X-Ray for music, see lyrics that display line-by-line while you listen to many of your favorite songs. You can also explore an immersive artist experience with photos, videos, and more.

Our interactive magazine experience allows you to start reading in just a few seconds with access to any back issue at any time on the cloud. Many Kindle Magazines come with a 30-day free trial.

Parents can create a profile for each of their children and choose what books, apps, games, and videos they want to give their kids access to. Amazon FreeTime is free on every Fire tablet. Parents can also set daily limits for tablet use, or restrict certain categories—like games and video—while leaving unlimited time for reading.