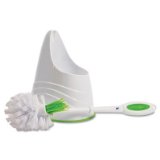 The Lysol Bowl Brush and Caddy will leave your toilet spotless. Made of quality poly fibers, this bowl brush has a curved head for reaching under toilet rims and a comfortable grip. Includes a caddy for storage when not in use and a hanging feature. Over the years, Lysol has expanded and improved their products to meet the world’s ever-changing needs and today, Lysol products, including cleansers, disinfectants and hand soaps are widely used in homes, schools and businesses around the world.