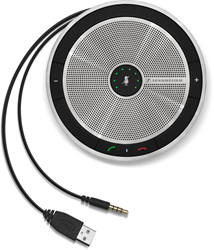 Sennheiser, a leading manufacturer of premium headset solutions, announces it will exhibit an array of its headsets and speakerphone products for unified communications environments at three major trade show destinations in the month of June. Sennheiser will demonstrate its high-performance contact center and office (CC&O) solutions at the Cisco Live, Call Center Week, and Avaya IAUG CONVERGE2015 Show.

The Sennheiser CC&O exhibits will include an array of headsets and speakerphones that enhance sophisticated VoIP and unified communications (UC) systems, offering compatibility with both Avaya Office and Cisco UC network environments. The Sennheiser booths will also incorporate a “Live Podcast” recording area, where individual interviews will be conducted by Telecom Reseller magazine among a roster of vendors during the event. The podcasts will be recorded using Sennheiser’s high-end, noise-cancelling headsets—proof of the effectiveness of these solutions, which can accommodate clear, professional-level interviews even in the middle of a bustling and noisy trade show floor.

Solutions to be showcased at the event include a range of wired, wireless, mobile, Bluetooth, Wi-Fi and DECT desktop models. These include the D 10 series, SD wireless, Century, Circle, Culture, MB and PRESENCE headsets. They will also exhbit the new SP 10 and SP 20 speakerphone units, which are small enough to be easily transported between offices in today’s highly mobile workplace environments. The units bring superior audio quality into the contact center akin to Sennheiser’s professional-grade, award-winning recording audio technologies, delivering exceptional voice intelligibility to any unified communications network.

Sennheiser CC&O will participate in the following events:

Cisco Live, a Cisco partner event taking place June 7 to 11 at the San Diego Convention Center in California. Sennheiser will be located at booth #3121 at the show.

Call Center Week, a leading industry-wide telecommunications conference taking place June 15 to 19 at the Mirage in Las Vegas, Nevada. Sennheiser will be located at booth #806 at the show.

The Avaya IAUG CONVERGE2015 Show, an event for Avaya partners, taking place June 14 – 16 at the Colorado Convention Center in Denver Colorado, at booth #512 at the show.

“The best way to prove the capability of the Sennheiser products is to let users experience them first hand, witnessing how well they perform under challenging conditions,” said Bill Whearty, vice president, sales and marketing, CC&O, Americas, Sennheiser Electronic Corp.

“More people need to understand the urgency of voice intelligibility and audio standards in contact center deployments. A high-end headset will maintain the integrity of a sophisticated UC solution,” Whearty continued. “A low-end version not only is less durable, some to the point of being treated as disposable elements of the system, but it puts the customer engagement experience at risk to be marred by jitter, tininess or distracting background noise. The exhibit floor podcasts are a terrific example of how robust our solutions are in real-world situations. In fact, the Live Podcast booths were inspired by how well these technologies performed during a previous Telecom Reseller podcast session, extemporaneously recorded on our own equipment at a trade event.”

The Sennheiser Group, based in Wedemark near Hanover, Germany, was founded in 1945 and has gone on to become a leading manufacturer of microphones, headphones and wireless transmission systems. Sales in 2013 totaled 590.4 million euros. Sennheiser employs more than 2,500 staff worldwide and operates plants in Germany, Ireland and the USA. The company has a worldwide network of subsidiaries in France, Great Britain, Belgium, the Netherlands, Switzerland and Liechtenstein, Germany, Denmark (Nordic), Russia, Hong Kong, India, Singapore, Japan, China, Australia and New Zealand, Canada, Mexico, and the USA. It also has long-established trading partners in other countries. Georg Neumann GmbH, Berlin, a maker of studio microphones and monitor speakers, and Sennheiser Communications A/S, a joint venture making headsets for PCs, offices and call centers, are also part of the Sennheiser Group.