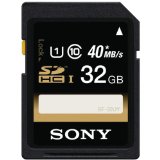 Up to 40MB/s Transfer speed1

Works with many devices

SD Memory cards can be used in any compatible hardware device.

Capture fast-action shots in stunning quality. These memory cards are compatible with DSLRs and HD camcorders alike so you can be sure you’ll never miss a moment. These memory cards can keep up with some of the fastest cameras around and boast impressive storage capacities for long-term shooting.

File Rescue downloadable software helps recover photos and videos that have been accidentally damaged or deleted.

Reliability You can Trust

2. File rescue downloadable software available at www.sony.net/memorycard. Software does not support data recovery for Content Protected and Game Data files. Not all data may be recoverable.

3. Based on Sony internal testing. Actual performance may vary based on environmental conditions and usage. Waterproof certified to IEC 60529 IPX7 standard, dust proof certified to IEC 60529 IPX5 standard, media is durable and data will operate after drop testing from 1.5m, can operate in temperatures between -13 degrees Fahrenheit (25 degrees Celsius) and 185 degrees Fahrenheit (85 degrees Celsius), is in conformance with ISO 7816-1 ultraviolet ray irradiation testing and with ISO 7816-1 x-ray screen testing, media data was not impacted after being placed on top of a 2,500 gauss magnet for 70 hours,anti-static certified to IEC 61000-4-2 standard, compatible with many Sony and other manufacturer’s hardware devices.

4. Video recording time is based on using a digital camcorder in 5 Mbps and 28 Mbps AVCHD settings. Number of photos (JPEG) images is based on using a digital still camera in 18 megapixel setting. Figures of the recordable photos and video hours may vary depending on models being used and shooting settings. The figures shown on chart are independent from each other; this card will not be able to store these quantities simultaneously.

5. 64GB card can only be used with SDXC compatible hardware products.